I might worry a bit excessively before and be afraid that I won’t be able to give an interesting talk or teach students anything, but then while I’m doing it and afterwards I realize that I really enjoy it. Teaching.

Its been a year now since the public health masters course in Public Health Science Communication at University of Copenhagen took off. Since it finished in December 2012 I have only taught science communication a few times. Last week I got a new dosage of interaction with students to discuss the communication of science. 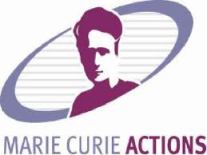 I was invited to give an introduction to science communication to a group of 14 PhD students under the Marie Curie Actions Initial Training Networks (ITN). The students all had a background in biology (or similar) and were just into the second year of their PhD. Most of them (if not all) were deep into lab science and were working at the smallest possible scale of the human cell and genetic materials. In my experience lab scientists often represents one of the most challenging group of researchers when it comes to arguing for why the should communicate science. Not because they don’t recognize it as necessary and useful, but primarily because they find it almost impossible to explain what it is they do. Overall these students were not much different. 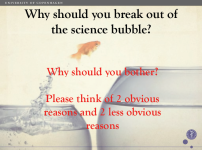 I had three hours at hand on what was equal to a Friday afternoon for the 14 students who after two weeks of presentations, social events and classes where looking forward to returning to their labs and weekends. Combined with the premises that this was an introduction to science communication I decided to try to make the class as fun and as interactive as possible and centered around the students themselves. My four main headlines around which the class was structured were therefore:

We did a lot of common brain storming of why one should communicate science, who is involved in science communication and where it takes place. The students were actually pretty good at this at a general level, but when it came down to their own research it seemed like they ran into the barrier that their research field is just so difficult to explain… I hope that at the end of the session the students had gotten some new perspectives on how you can approach communication of your research. For example that research is not just about the facts, theories, hypotheses and results but just as much about curiosity, frustrations, hope, processes, challenges, dreams and collaboration. All things that can be easier to explain than the genetic description of what determines the structure of a receptor protein on a cell involved in the development of fat cells. Or at least easier for the outsider to relate to. 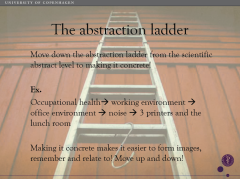 I chose also to allocate some time to some practical communication (mostly writing) tips. Little things that can make writing a little easier, which I learned in School of Journalism. I tried to include some fun examples with little YouTube clips (e.g. The Great Sperm Race as an example of the power of comparison) and sound clips (e.g. Radiolab’s podcasts and experimenting with sounds). And then of course I tried to open their eyes to social media as something that is not only useful in their private life but could play a role in their research and research communication! When I mentioned the word ‘blog’, I saw many rolling eyes, but arguing that even peer viewed journals like Nature uses blogs seemed to legitimize the blog just a tiny bit.

All in all it was great being back in my teaching mode and I hope that the students got something out of it too. I look forward to my next teaching job which is in Copenhagen at Informations medieskole, where I’ll talking to Danish researchers about social media’s role in research and science communication. More on that to follow.