A ‘Humanities Perspective on Health’. I must admit that my prejudice about humanities flourished in my head when I last week decided to attend the ‘Institute day’ of the Department of Media, Cognition and Communication (MCC) at the Faculty of Humanities at University of Copenhagen. The headline for the event was “Humanities perspective on Health”. 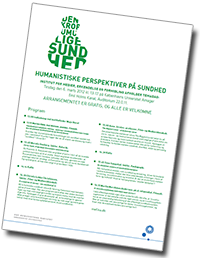 My reason for bringing up the MCC institute day here on this blog is that a few of the presentations focused on the communication of health (see complete programme here – NB in Danish). Two presentations took their starting point in health as it is portrayed in television. Associate professor Christa Lykke Christensen took a closer look at health in Danish TV from the past to the present and Anne Jerslev, professor of Film- og Media Science, talked about “The biggest Loser”, a reality programme with obese people, as an example of a health related television programme from the US. Finally associate professor Tone Saugstad talked of didactics in health campaigns.

Unfortunately, I wasn’t able to attend all sessions, but from the ones I attended I put together this small Storify of my tweets (also in Danish). As far as I am aware, I was the only one tweeting at the event, so the tweets naturally only reflect my impressions. Would have been great if there had been others, but that was perhaps too much to expect at a department of media and communication.

Below are a few of my thoughts from the afternoon presentation.

Crista Lykke Christensen illustrated in her presentation how television programmes in the 1970’s until the 00’s portrayed health as equal to the absence of disease. Most programmes used the format of documentary, reportage etc. looking at things like pollution and structural things in society that caused disease and illness. The responsible parties was to a large extend society, the industry etc. From the 00s and onwards the perspective changed. According to Christa Lykke, health as it is portrayed in Danish television today is no longer equal to the absence of disease, but is to a large extend now equal to the absence of obesity. The programmes use formats such as docu-soap, reality show etc. A consequence of this is, according to Christa Lykke, that in todays media coverage of heath, the true “health experts” have been replaced by “know-how experts” (coaches, diet experts, fitness instructors etc.) The ‘true experts’ have been pushed to the side.

Thinking it terms of public health science communication, I guess this means that the traditional health scientists are ‘up against’ a new league of people, not just the public or the politicians but also these new know-how experts. This fact is not revolutionary, but it just made me think about how science communication needs to find its strengths in comparison with the communication from know-how experts. Although Christa Lykke didn’t touch upon it in her presentation, it is obvious that know-how-health-experts are not just a TV phenomenon. Also online are there thousands of them. They have discovered the power of the blogs and social media – at least in comparison with Danish Public Health and Health scientists who almost shine by the absence. The know-how experts have made themselves available to the public and through online platforms they give on all sorts of health issues in a language their audience can understand. Perhaps scientists should let themselves inspire a little and dare to take a risk and communicate their research through other platforms that the peer-reviewed journal and conference presentations. Not by copying the know-how experts, but by finding their own format, suited for their research in the interactive platforms.

I have never attended a meeting at the Department of Media, Cognition and Communication (MCC) but I did (perhaps naively) expect that communication methods would be kind of cool and in sync with the newest developments. I was however to be disappointed – both when it came to presentation technic and the media covered in their presented research. Not once during the afternoon (at least in the part that I attended) was social media for example mentioned, even though this is a quite significant player on the health scene. Only a short mention of the fact that the programme “the biggest loser” also had an online world where viewers commented on the programme and shared their own obesity stories. The presentation on communication used in health campaigns by associate professor Tone Saugstad, was limited only to mass media, and when I asked her about the role of social media in national health campaigns she looked like one big question mark!

Also it was surprising how few photos, video etc. was on their presentations. Only at the end of the Anne Jerslevs “Biggest Loser” presentation did we get to see some photos from the show. No YouTube video clips, no sound clips, no illustrative examples from Christa Lykke, no examples of health campaigns – just ppt slides with bullet points. Quite surprising at a Department of Media, Cognition and Communication I must say!

All past, no future

Finally, I got the impression that the research presented was all very backwards looking. It was all about what had passed and no mention of what media coverage of health in the future could look like. Nor much opinion on whether the current coverage was good or bad or what consequences it has for public health (eg. does it influence the populations perception of what health is, how we utilise the health system, whether we eat differently etc). That it was all about the past and not so much the current consequences or of future communication was clearly illustrated when Christa Lykke replied that she had no comment on what she thought about the current coverage of health in TV, or any suggestions as to what the future would, could or should look like. She said that was not her role as a researcher. My thinking is that if researcher do not dare to, based on their knowledge and expertise, comment on the development, well then science is sure to lose the battle to the know-how experts….